by Lorna Weston Smyth | May 2, 2015 | Motivation, Personal Development, Self Leadership 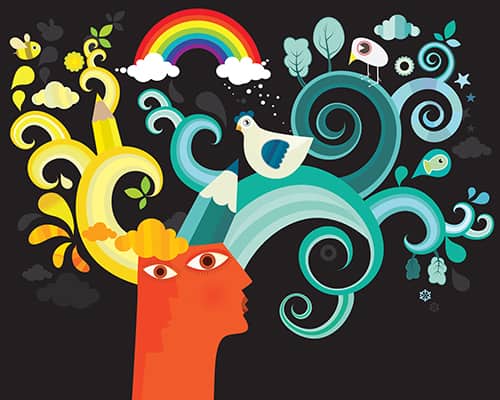 Imagination is defined as the act of forming a mental picture of something that is not present to the sense or has never been completely perceived in reality. Everything around us started as an idea stemming from someone’s imagination.

Think about the computer, cell phone, bed, airplane, fork… no matter how insignificant or complex something may seem to you now, it started as an idea formed from an imagination.

Imagination is what allows us to have plan B’s for survival. We can imagine all sorts of scenarios and possibilities and then develop plans. Through discovery, we get ideas no matter how fantasy or reality based they are. Then through justification, we assemble objective evidence to formulate possibilities. Therefore, imagination not only creates ideas but also justifies them to allow action to be taken.

Imagination contributes to knowledge growth through learning from mistakes. When we make mistakes and take a moment to reflect on what happened, we then begin to imagine what could have happened if we had taken a different action.

Imagination is what allows us to create a life we wish we had. By exercising that magnificent mental muscle, we can change the outcome through our creative imagination by taking a moment and really imaging what it is we want – with clear details and practicing this every day until what was once an idea becomes our reality.

Without imagination we wouldn’t have all of the things around us. Take the light bulb; Thomas Edison worked diligently on perfecting a commercially manufactured light bulb. He imagined that it was possible and eventually achieved success. He has been quoted as saying “I have not failed. I’ve just found 10,000 ways that won’t work.” What if he had not used his imagination and believed in the possibility?